First of all, there are filters for lenses (screwed into the thread of the filter mount or inserted into a special holder on the lens) and filters for pulsed light, installed in the mount for the filter in the flash or simply fixed with a rubber band for money. We’ll talk about everyone.

protective, the simplest type of filters, they simply protect the front lens from scratches, they are installed upon purchase and are not removed, as they have a similar mounting thread for other filters on the reverse side. In terms of structure, this is ordinary glass, just a little better quality than window glass. In labeling, “protector” is usually used. 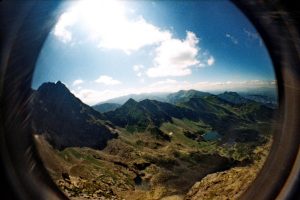 ultraviolet, which are often often used as protective ones, additionally also reduce the flow of ultraviolet radiation, which the human eye does not see, but the matrix sees perfectly. In the final image, UV and some of the polarized light result in a cyanish tint to the sky and may even overexpose it. Using a UV filter can often reduce this effect by making the sky a little darker and a little bluer. They are usually referred to as “UV”.
infrared, on the contrary, filters are very specific. In contrast to ultraviolet, which block only the ultraviolet part of the spectrum, on the contrary, they filter out the entire visible spectrum, and leave infrared. Modern digital cameras capture part of it, so they can record information in very specific conditions. Since the filter covers the entire visible spectrum, you won’t even be able to focus or measure the exposure – there will be absolute darkness in the viewfinder. Therefore, you must definitely use a tripod (you will definitely set a slow shutter speed), manual shooting mode and focus on the object in advance. The result of applying the filter is very unusual: the trees are wintery white, the sky is black, and some of the objects buggy change their color. Filters are designated as “IR”.
polarizing, which are of two types, linear and circular – the first is not very effective in reducing polarized light, invisible to our eyes, but over the entire filter field and at any angle, the second is much more effective in reducing this flux only at a right angle to the optical axis, any of them must be rotated before each frame, controlling the effect in the viewfinder. The latter are much more popular than the former (naturally, because they press the unnecessary spectrum harder), which makes the former much more difficult to buy. In fact, the effect of applying the filter looks like a more contrasting picture: the sky is very blue, the shadows are deeper, and the water is almost transparent, with a minimum amount of glare, at this angle even our eye does not see the bottom, and in the frame the water layer will be absolutely transparent, depending from her purity, of course. Due to the fact that the filter actually consists of two rings, it turns out to be very thick and cuts off the corners of the image by vignetting on wide-angle lenses, which is why many manufacturers switched to thin polarizing filters (marked “slim” and higher price). Filters are marked as “PL” (linear) and “C-PL” (circular).
gradient, which also come in two types, rotating 50/50, which have a half-frame blackout and rotate like polarized ones, and regular square ones for installation in a special mount on the lens. They are needed to equalize the exposure when shooting landscapes, in order to slightly darken the upper part of the image, and the bottom, accordingly, to expose better. As a result, you get an image with correctly exposed sky (blue with beautiful clouds) and land or water (no shadow gaps, with enough detail). Both types of filters are inconvenient: round ones divide the frame, contrary to the canons of framing, exactly in half, and square ones require a special adapter, so they are far from being compact and efficient. As an analogue of applying a filter, panoramic or HDR stitching is now often used. 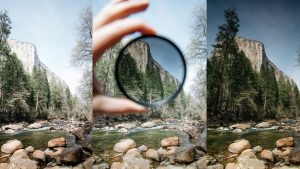 neutral, which are of the same type, but differ in density. They are all needed in order to lengthen the exposure without introducing any color effects. These are simple “dark glasses” for the lens that darken the image by 1/2 stop or more. Their effect is usually indicated on the label, for example, ND2 (two stops, i.e. four times longer shutter speed is available, all other things being equal) or 400x (nine stops, rounded – these can arrange the sunset manually). Remember that they darken shadows more than highlights, and in most cases, if you use too dark, the shadows turn out to be a failure. The effect of their use is visible when you want to shoot, for example, a portrait in bright sunlight, but with an open aperture, besides, with a fully functional flash, or blurry water when shooting sunset or dawn, when the sun dominates the exposure, many also shoot waterfalls in sunny places – in general, all cases when you need to force a slow shutter speed or open the aperture if the lighting conditions do not allow you to do this. They are designated, as can be understood from the above, “ND”, followed by a certain number.
color, which were relevant in the film era for working with black and white and color films.