Just a few words about the technique and recommendations for novice experimenters:

Take a camera with a zoom lens, and the zoom should be controlled directly by the ring on it, and not using a drive motor. Accordingly, compact devices and fixed lenses are automatically eliminated.

Take a tripod or think of any other way to fix the device (lean against the wall, use the hands mentioned above).
Remember that the key to the shot is the subject: find an interesting object that is bright and contrasts with the surroundings, both in light and in contrast. Remember that light objects are fixed on the photosensitive element first, and dark ones follow, therefore bright and colored objects will leave a more noticeable trace.
In order not to suffer with autofocus, it makes sense to use manual focus.
Wide-angle zooms are better than usual ones – the narrowing / expanding effect is more noticeable on them, since they also have a wider coverage of space. In other words, a 12-24 lens will give noticeably better results here than an 18-70 lens, even though the latter has a higher zoom factor.
Watch not only the shutter speed, but also the aperture. To get good clear lines, it is advisable to close the aperture moderately, but you should always remember that there is a risk of choosing an aperture wider than allowed at the long end (for example, set it to 4, and the maximum aperture at 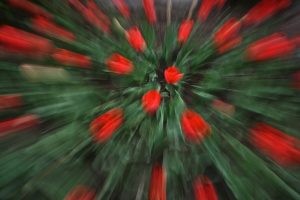 70 mm can only be 5.6) – then the camera ( no fool) will automatically close it and ruin one exposure setting for you. Therefore, it is better to shoot in aperture priority, looking at the shutter speed or in manual mode if you have already eaten the dog.
Gradually start connecting the flash in slow sync mode – by the way, here the effect of different modes is especially noticeable: if you set the front-curtain sync and turn from wide-angle to less wide-angle, the effect of narrowing the object will be created, and if you set the rear-curtain sync with the same movement , you will get an expansion effect, something like in the frame above.
A little later, try experiments not only with the zoom rotation, but also with the rotation of the camera (it’s easy to do – hold the zoom ring and rotate the camera itself), then the effect is also spiral. Try to move the camera, it also looks unusual.

In general, do not freeze on these tips – go ahead, experiment, spin, think and experiment again. There is no need to try to shoot absolutely everything using the zoom explosion technique, but it is necessary to practice for a couple of days, so that later you can apply this method at the right time. Happy pictures!